Thank you to all who attended in person and watched on EWTN the Anniversary Mass at the Cathedral of St. Paul in Birmingham, Alabama on August 11, 2021. THE MASS IS NOW AVAILABLE TO WATCH ONLINE. 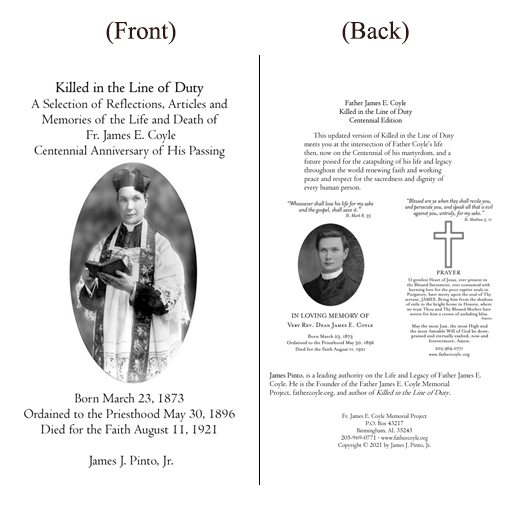 Killed in the Line of Duty, New Centennial Edition Book by Jim Pinto

This newly revised Centennial Edition 56-page book contains four additional essays by Jim Pinto. A Selection of Reflections, Articles and Memories of the Life and Death of Fr. James E. Coyle on the 100th Anniversary of His Passing. On August 11, 1921, Father Coyle was shot and fatally wounded as he sat in the swing on his rectory front porch by an enraged minister whose daughter’s marriage to a dark-skinned Puerto Rican Father Coyle had presided over less than two hours before he was shot. Father Coyle was a “martyr to duty,” The Rt. Rev. Edward P. Allen, Bishop of Mobile, August 13, 1921.

In addition to telling the mostly unknown story of Father Coyle, the primary objective of this documentary was to shed light on Father Coyle’s life and character, and how he stood his ground on faith and human equality despite the constant threats and ultimate violence that took his life at the very church he pastored for 17 years.

We have partnered with Alabama Public Television and have received their commitment to air the documentary in 2022, with the first airing taking place on February 24th, at 8:30 PM CST. 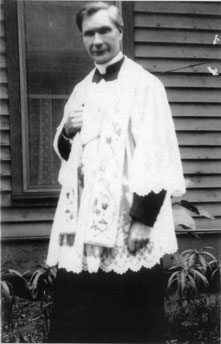 Learn more about Father Coyle and the  support for this important documentary.

The Story of Father Coyle

Your feedback helps us with future productions.

With the passing of the hundredth anniversary of Father Coyle’s martyrdom,

there is great anticipation and planning for numerous ventures to help catapult the sacrificial witness of this holy priest into the awareness of many throughout the world, that many may be inspired to reconciliation to God and one another.  May many emulate Father Coyle’s sacrificial life as articulated in the last words he penned in the Church Notice Book shortly before the giving of his precious life. “Give. Give until it hurts, then and only then is there sacrifice.”

Your support will enable the Father Coyle Project to pursue the task of archiving and digitizing the numerous writings and photos of Father Coyle so they will be preserved for future genertions.

Thank you for helping to keep the memory and sacrifices of Father James E. Coyle alive for future generations.

Join us for the annual Mass to honor Father James E. Coyle’s Life and Legacy.

Get Notifications for Upcoming Events

We invite your participation and you may reach a representative of this project at: